Allen & Young cover South-East London and are fully insured. We can guarantee that you will receive a professional service at all times. Simply click on your area for further information. 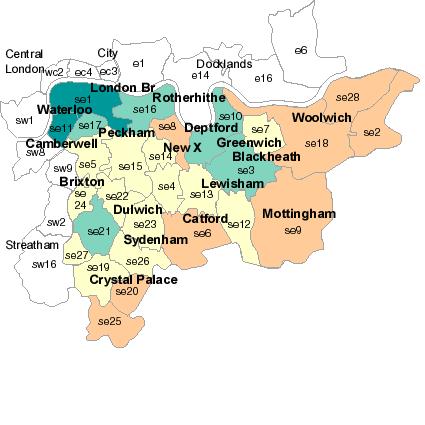 The postcode area originated in 1857 as the SE district. In 1868 it gained some of the area of the abolished S district, with the rest going to SW. It was divided into numbered districts in 1917. SE28 is a much later addition formed from the division of the SE2 district to accommodate the development of Thamesmead. Unlike in the SW postcode area, where districts are also split into two alphabetical tranches, SE1 is the only head district.

A small group of residents in the West Heath area wish to have their postcodes changed from SE2 to the adjacent DA7 postcode district; citing higher insurance for their houses, belongings and cars as reasons to change. Royal Mail have said they will not consider changes to postcodes for these reasons. Read more…