Allen and Young are a London Removals Company and offer the full range of our moving services in throughout London. A specialist in London Removals, over many years we have built up a wealth of experience and equipment in moving your valuable belongings safely around the capital.

London has many narrow streets, no parking areas and building with poor access. Our team understand the problems we are likely to encounter moving your belongings in London's mixture of apartments, studios, flats, town and suburban houses. We have access to specialist equipment such as furniture lifts for removals in London apartments and can use smaller vehicles to gain access to mews properties and estates.

In addition to our London removals services, we also provide expert packing services, House clearance and secure storage. We can also arrange worldwide shipping services from central London and can move your belonging from London to any country in Europe with our express door to door European removals.

Please see our main pages for more detail about our London removal services and check our area pages so see if we offer services in your area. Allen and Young offer Removals Services to all London Districts and all of the following central London postcodes: E1, E2, EC1, EC2, EC3, EC4, N1, NW1, SE1, SW1, SW7, SW3, W1, W2, WC1 and WC2 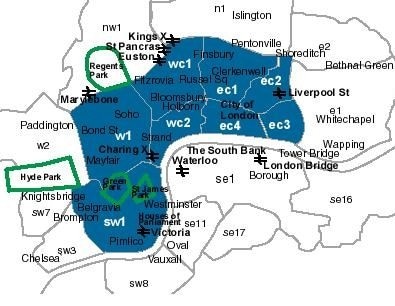 About London and Central London

The term Central London refers to the districts of London which are considered closest to the centre and comprises the postal districts E1, E2, EC1, EC2, EC3, EC4, N1, NW1, SE1, SW1, SW7, SW3, W1, W2, WC1 and WC2. Allen and Young Ltd regularly carry out removals in London and the surrounding suburbs. There is no conventional definition, nor any official one, for the entire area that can be called "central London". Central London covers about 10 square miles (26 square kilometres) on both areas of north-south River Thames. Central London can be split into three main sections, the City, the West End, and South Bank. The South Bank stretches over the river from these regions. Allen and Young Ltd carry out all moving services including removals, man and van, storage, packing and house clearance in the London area.

As a starting point in considering what "Central London" means, it is important to recognise that London does not consist of a small high rise core surrounded by a belt of very low density districts. The situation is more complex. The section of London that is of an urban, as opposed to a suburban, character is very extensive, encompassing most of the districts built before 1914. Before World War I, most London housing, including housing in the most expensive districts, was terraced. Low-density suburbs were first built in the early 19th century, but they did not become predominant for another hundred years.

During the 20th century, and especially in the decades after World War II, the size of the fashionable central area of London shrank considerably as the old aristocratic London elite faded away and many members of the middle classes decided that living close to the city centre was no longer appealing. At that time, government planners often had a negative view of urban life, and as a large amount of housing in central London had been destroyed during World War II, many members of the working class were also induced to move out of the city centre as well, either to suburban developments around London or to new towns further afield. However, since the 1980s, many of these areas have become gentrified, and they are regarded as desirable areas of London once again. A very large section of urban West London still contains areas which are extremely expensive to live in. These areas are Mayfair, Knightsbridge, Brompton, Kensington, Chelsea, South Kensington, Belgravia, Holland Park, Notting Hill, St John's Wood, Marylebone and Soho.

In 1858 London was divided into postal districts in order to aid the forwarding of mail items. The two most central districts were "EC" - East Central which broadly covered the City of London and "WC" - West Central which covered the area immediately west of there as far as Charing Cross Road and Tottenham Court Road. Read more...